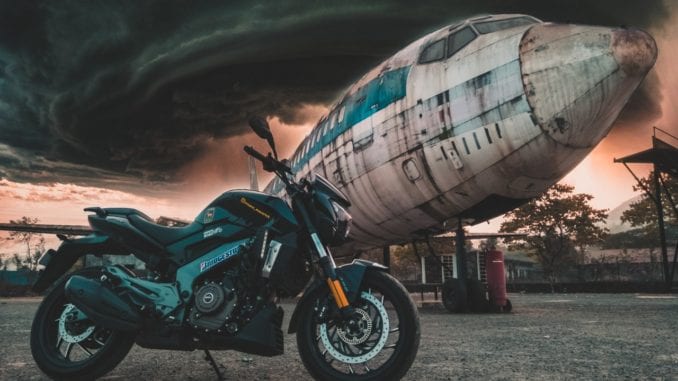 Ready for the motorcycle of the future?

If you are looking for the ultimate way to take to the sky, don’t waste your time with planes, helicopters or even jetpacks. Get ready for a jet powered flying motorcycle.

California company JetPack Aviation is developing a flying motorcycle called The Speeder that is capable of vertical takeoff and landing with five modified jet engines.

“This is a compact machine… that can take off vertically from your front lawn or driveway and land on the other side of the city in a similar position,” said David Mayman, the CEO of JetPack Aviation. “That kind of convenience and size is what we’ve all dreamed about, but this idea has always been treated like science fiction.”

Flying motorcycles have long been a staple of science fiction, especially appealing to those who grew up watching “Return of the Jedi” and the exciting speeder bike chase.

The machines were also seen in the cult television series “Galactica 1980” and the films “Star Trek” and “Looper.”

The company is already testing a one third size version and expects to have 20 full size models available for sale next year.

The Federal Aviation Administration does not require a license for powered ultra light aircraft such as the Speeder. FAA rules only require that they are solely operated during daylight and cannot be used for commercial purposes.

More: Does a truck make you more manly?

Mayman explained that the company had been developing jet packs for use in the military by Special Forces soldiers. However, the need to carry equipment and other payloads steered them into development of the Speeder.

The Speeder could be used by the military in areas where helicopters could not maneuver, said Mayman. It can be easily transported on a boat or the top of a military land vehicle and can also be operated remotely from a distance.

While the Speeder currently operates on a kerosene-based fuel, the company said it might be adapted for electric motors in the future. Yet at this time, electric batteries just don’t offer the speed or power of the current system, the company said.

Over the last decade, numerous companies have been developing different types of solo flying machines for use in personal travel as well as emergency services.

In 2017, Dubai police unveiled a flying motorcycle called The Scorpion that used propellers. It can reach speeds of 40mph and carry about 600 pounds.

The Texas company Hexa is developing a single seat personal aircraft that uses 18 propellers to carry individuals up to 250 pounds.